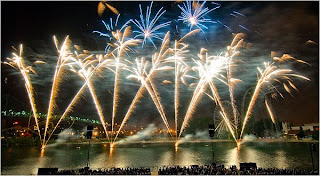 LATE last Saturday evening, La Ronde, an amusement park that’s just a stone’s throw from downtown Montreal on an island in the St. Lawrence River, seemed an unlikely venue for a world-class competition. Teenagers with the giggles and other signs of roller-coaster overexposure contemplated yet another ride on the Super Manège or Le Monstre. Younger children, slowed by too much barbe à papa (cotton candy) and poutine (that Québécois concoction of French fries, cheese curds and gravy), were willed along by weary parents. The occasional large Fred Flintstone or Scooby-Doo plush doll appeared among the midway crowd, bounty from booths like Frappez la Taupe (Whack the Mole) and Roulé-Boulé (a form of skeeball).

GENERATIONS Some families haven’t missed any of the shows for years.
But just a few feet away at La Ronde’s small lake, before a grandstand filled with about 5,000 people, with thousands more waiting in anticipation elsewhere in the park, along the riverbanks and on a nearby highway bridge that had been closed to traffic for the occasion, a tuxedoed master of ceremonies introduced Fabrice Chouillier, a French pyrotechnician, and his team. The 24th International des Feux Loto-Québec, the international fireworks competition that runs for two months every summer in Montreal and draws millions of viewers, was about to begin.

Mr. Chouillier, whose company, Prestatech-Artifices, is the first of nine competitors this year, walked through the crowd to a control booth at the top of the grandstand, ready to start his computer-controlled extravaganza, built around the theme of space exploration and synchronized with orchestral passages from “2001: A Space Odyssey” and other works. He’d designed the 30-minute show at his office near Paris, had shipped thousands of shells and other fireworks across the Atlantic, and had been preparing them the last five days at a series of bunkers and platforms in an off-limits section of the park.

Across the lake, the lights on the park’s Ferris wheel flickered off. Among the crowd, the hawkers selling beer and blinking devil’s horns grew silent. As the opening strains of “The Blue Danube” waltz filled the air, a series of pyrotechnic strobes went off on the far side of the lake. The Strauss faded out, replaced by the “10...9...8” of an Apollo-era countdown, each number embellished by a comet, a shell that leaves a glittering trail in its wake. At zero, a line of fountains started spewing fire, and a loud rumbling began. It was as if the whole lake was about to lift off.

For the public, the competition is a chance to see 10 grand pyromusical displays — including a noncompeting show that closes the festivities — throughout the summer. In a city known for its festivals, the fireworks are exclamation marks that punctuate many Saturday nights, and a few Wednesday nights as well. Officials at La Ronde, which was built for the 1967 World’s Fair and is now owned by Six Flags, estimate that last year more than three million people watched the displays.

A jury of 19, chosen from the public, evaluates each performance and at the end awards golden, silver and bronze trophies to the top three. There’s no prize money, but that doesn’t really matter: for Mr. Chouillier and the other pyrotechnicians, just being invited to participate in the competition, generally regarded as the industry’s most prestigious, is an honor.

“It’s a sort of consecration in the life of a fireworks artist,” Mr. Chouillier said last Friday as his team, aided by La Ronde’s own crew, loaded aerial shells up to a foot in diameter into firing tubes.

Or as Stephen Vitale, president of Pyrotecnico, the American entrant in the event this year, put it, “It’s like the Olympics for us.”

It’s also a chance for these companies to design a show just for themselves, rather than carrying out some client’s vision. “What’s great about this competition is you have total freedom,” Mr. Chouillier said.

OF the hundreds of thousands of people who see each show, only a fraction are paying customers in the park. Many are like Marcel Gareau, a construction worker who with his family had driven from the suburbs and was installed in a lawn chair on the Montreal side of the St. Lawrence a full five hours before the fireworks began. The Gareaus have hardly missed a show in a dozen years, watching over the trees and listening to the soundtrack on their car radio.

They’ve seen the work of some of the best fireworks companies worldwide — from China, Australia, Italy, Portugal and elsewhere — but Mr. Gareau has a clear favorite. “The Americans,” he said. “They make the most noise.”

The competitors and the jury like a good racket as much as anyone, but for them the shows are more about conveying emotion through kamuro shells, go-getters, tourbillons, Chinese cakes and other pyrotechnic effects, all intricately synchronized with the music.

You have to have a lot of emotion to think about the soundtrack and the colors and everything,” said Martyne Gagnon, who has directed the competition since 1998 and is herself a licensed pyrotechnician. “It comes from the heart.”

Ms. Gagnon is in charge of choosing the competitors, and she keeps tabs on possible candidates within the small community of professional fireworks companies. She almost always invites teams from Canada, the United States and Australia, a couple from among Europe’s big three — France, Italy and Spain — and usually another European team or two. She tries for one from Asia, and this year she got two, from South Korea and China. Competitors are given a fixed amount of money for materials, but some pay for extra shells and effects out of their own pockets — which may be one reason the Americans make the most noise.

The jurors get a day of training in the science and art of pyrotechnics. Magalie Pilon, a doctoral student in physiology who was among those chosen for the jury from 550 applicants this year, was taking the job seriously. “This is a big party here,” she said as dance music thumped in the grandstands a few hours before the show. “But we have to concentrate because it’s important.”

“But if they wanted a professional jury they would have asked for it,” she said. “As a member of the public, I know I’m good.”

That confidence comes from having seen almost every display for the last six years. But she used to watch from the bridge, where her family had a special spot each week. As a jury member, she now has a prime seat for every show for herself — and for one guest.

“Let’s just say that now I am very popular,” she said. “I could ask for anything. Maybe I’ll ask for somebody to wash my car.”

THE grandstands offer certain advantages over the view from the bridge or the riverbanks. Many of the low effects can’t be seen from far off. And the shows are designed to look best from straight on.

Mr. Chouillier used plenty of low effects, starting with the fountains that, accompanied by the rumble of a rocket engine, seemed to simulate the launching of a Saturn V. Then it was on to “Also Sprach Zarathustra,” with exploding mines and other effects piercing the sky, choreographed to the piece’s famous kettledrum passages.

The “Star Trek” theme followed, with glittering showers of tiny stars looking for all the world like what Captain Kirk disintegrates into when Scotty beams him up.

There were brilliant flashes, head-throbbing bangs, huge groups of flares in red and green, chrysanthemums in red, white and yellow and, during passages from “Mars, the Bringer of War” by Gustav Holst, dozens of small green flares that seemed to dance on the water like little green men. More comets crisscrossed the sky in perfect time with the music. And at 30 minutes the whole thing ended in a barrage of pale gold-and-white shells, accompanied by more music from “Star Trek.” As the smoke drifted, the final sounds were heard: the five-tone alien signal from “Close Encounters of the Third Kind.”

Afterward the verdict among some of the veterans was that the show was probably not a trophy winner — that the choice of theme and music was a bit clichéd, that the effects weren’t startling enough, that the all-white finale, though elegant, lacked a certain drama.

But back at a makeshift beer hall where team members and others relaxed and discussed the show, Mr. Chouillier looked happy and relieved. “My big fear was that something would go wrong, and it didn’t,” he said.

And judging from the hoots and hollers in the grandstand, the show was a crowd pleaser.

“It’s the best we’ve ever seen,” said Mark Jeffries, a Floridian who with his family had come to Montreal to visit his mother. “There’s some fireworks we’ve never seen before.”

His 11-year-old daughter, Carlin, had no problem with the finale.

“In Florida they shoot off all of them,” she said. “They kind of overwhelm you. This was different. Just nice and white.”

L’International des Feux Loto-Québec continues every Saturday through Aug. 2 and on three Wednesdays — July 23 and 30 and the closing show, on Aug. 6. The countries represented include Australia, Austria, China, Italy, Portugal and South Korea; the United States entry’s show is on July 30. Fireworks begin at 10 p.m.

Grandstand tickets, which include all-day park admission, range from 44.90 to 56 Canadian dollars (about the same amount in American dollars) for people over 4-foot-6; it’s less for those under that height. After 5 p.m. tickets are about half price.

La Ronde is best reached by public transportation. The Papineau Métro station, on the Green Line, connects with the 169 bus, which goes to the park’s front gate. Alternatively, the Yellow Line stops in Parc Jean-Drapeau on the other side of the Île Ste-Hélène; it connects with the 167 bus to La Ronde, or a 15-minute walk will get you there (and you’ll pass the geodesic dome designed by Buckminster Fuller for Expo 67; it now houses an environment museum). After the show, walking to the Yellow Line is the best way off the island.

Free places to watch the shows include the Jacques Cartier Bridge, which closes to traffic at 8 p.m.; the Old Port of Montreal; and around Boulevard René-Lévesque north of the bridge.
Posted by Cindy at 6:41 PM