There has been much talk lately about how the Shanghai Expo will impact on the shipment of fireworks. It is still early, and so far this is what we know. Shanghai has two ports: Yangshan and Waigaoqiao. Yangshan is far away from the city center and the Expo venue. Waigaoqiao is near the Expo venue. Most of the mother vessels for US shipments call Waigaoqiao and most of the shipments to Europe call Yangshan port. Right now, it is believed that shipments to the US starting early to mid April 2010 will be most affected by the Shanghai Expo, if Yangshan port will be closed for fireworks.

At present, the port of Zhaoqing is still being worked on. We have heard a handful of containers of fireworks have been successfully transshipped from Zhaoqing to Hong Kong, but up to this time has not been a smooth process.

There is also talk of Maersk working to open services from Wuzhou port in Guangxi for transshipment in Hong Kong.

Many ocean carriers are now having difficulties fillings up spaces on their vessel due to the economic downturn and are frequently changing their schedules and routing to avoid losses on each route. Maersk just announced as of mid May, they will cease services from Hong Kong to Tacoma and Seattle, and instead can only offer services from Shanghai to Tacoma and Seattle.
Posted by Cindy at 6:31 PM No comments:

The International Symposium on Fireworks was held in Puerto Vallarta, Mexico last week. With over 300 attendants from 30+ countries, and 10 fireworks shows over the course of the week, it was a fantastic symposium! The Mexican hosts did a great job organizing the event and showing everyone the unique style of Mexican fireworks, and the time and work involved in building their famous Castillos!!

We had a great time watching all the Castillos with their funky colours of blue, pink, red, white, yellow, purple, orange, aqua, pink glitter, white glitter and green glitters! The photos and videos don't come close to showing the actual colours or brightness of the lances. Almost all the time the colours are so bright that cameras have to be adjusted to its lowest exposure value (mine was -2.0)

The colours are so saturated and pure that it is hard to believe you are looking at something burning and not little Christmas lights! At the end, the lances usually turn into a blindingly white, green, aqua or pink strobe effect that has to be seen to be appreciated. 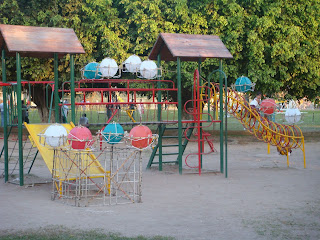 Girondolas with lances set up on the playground 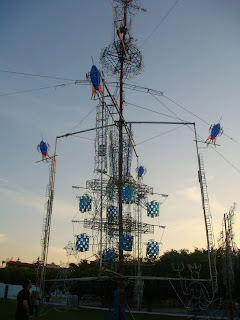 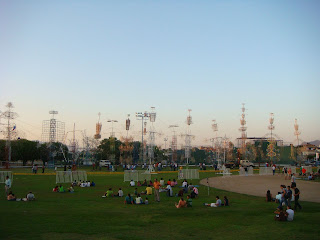 View of all the Castillos ..

This was an amazing show, lasting over an hour with lots of mosaic walls, groovy wheels, girondolas and set pieces. 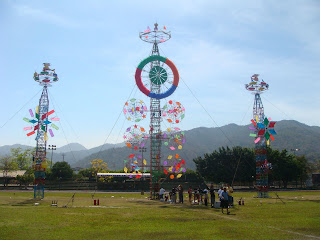 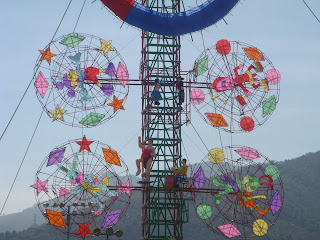 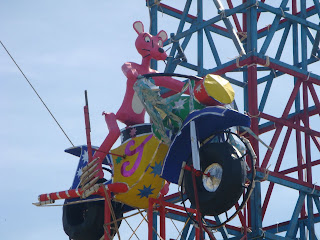 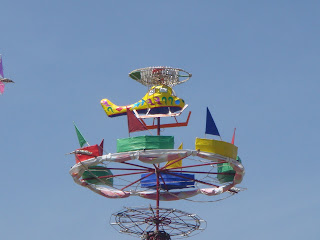 Helicopter on the top of the Castillo - it looks small in this photo, but after "landing" ... 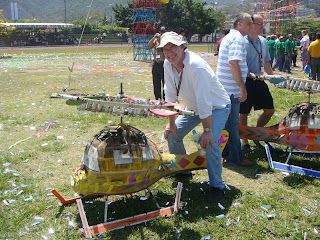 this is how big it was! That's John Werner in the photo, with Phil Grucci and Tino Foti behind posing with the other helicopter. 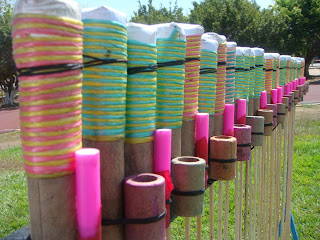 Rows of rockets with colour smoke and whistles!

This was the only daytime display at the Symposium and it was truly unique. It lasted for about 20 minutes and was like watching a puppet show with plenty of surprises. 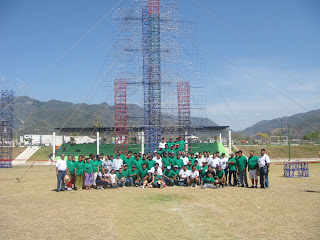 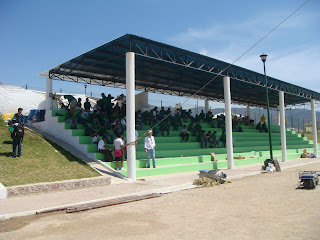 Lunch time for the crew 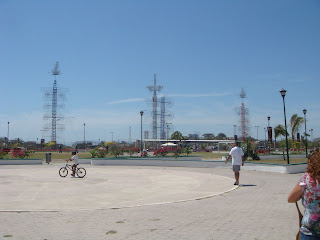 View from the playground behind the display. 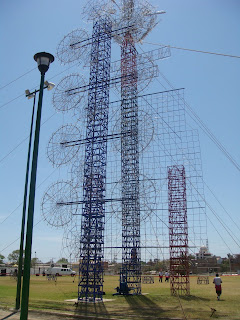 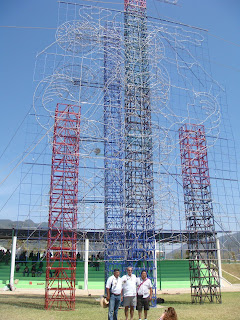 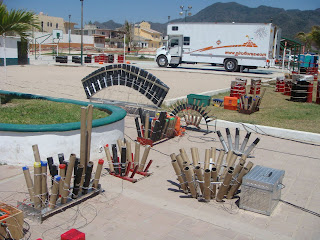 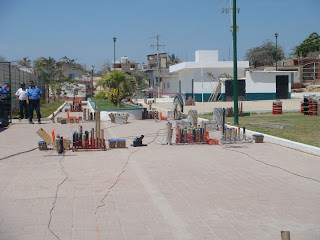 About 6 armed security guards watching the set up. 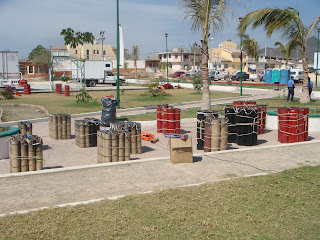 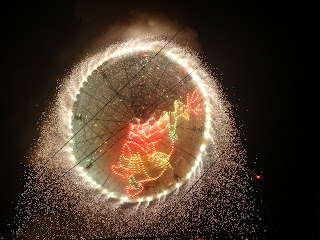 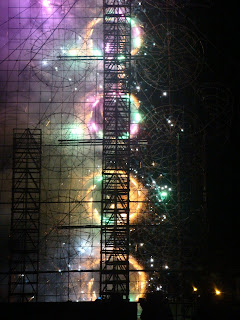 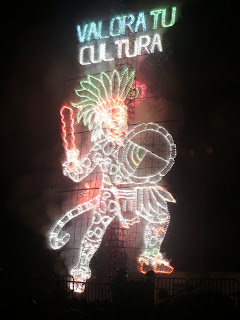 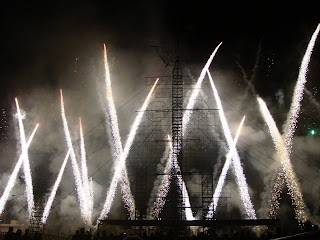 Similar to Sky Lanterns, these colourful Hot Air Balloons come in all different shapes and sizes, and even come attached to lances for nighttime! Under the balloon is a knitted ball soaked in camphor. 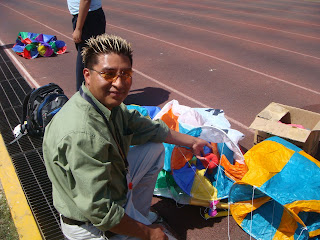 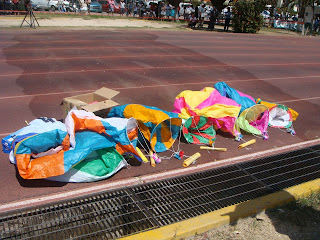 
Here's one at night with lances hanging off! One of these fell back into the audience a minute or so after going up, but it's Mexico, so it's cool!!

Mexico Ante El Mundo or Mexico To The World was the title of the show. Amazing Castillos of 3 famous landmarks

From San Pedro Zumpango, David Silva of Pyro ® Producciones Piromusicales designed and fired this 19 minute show with FIREONE ® equipment. The pyromusical show consisted of a great Castillo with double tower 30m high with set pieces, 3”, 4”, 6” an 8” shells made by the Ramos Family, and bonbettes, candles, mines and comets made by APM Fireworks of Joel Hernandez.

This show was an excellent choreographed display to music with a fantastic set piece with a giant spinning wheel. A horizontal butterfly set piece that takes off!!

Photo of the set up: 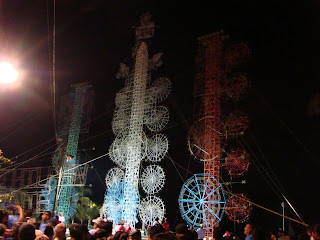 This was fantastic! Started off as a motionless circle gerb set piece but then the two rotation wheels started!


As this wheel spins, one pattern emerges but after about 20-30 seconds, the pattern changes to another and then back again! The lances are made with a "dark" composition pressed in between one or two colours.


Lots of mini girondolas on top of the Castillo!!

This display was fired at the end of the Closing Gala Dinner on the beach at the Westin Puerto Vallarta. Due to technical problems, the display did not start until 11pm. 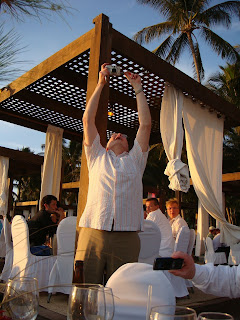 This display was at the Sports Ground, but those that attended the Gala did not see this as the show started promptly at 11pm, as there were about 45,000 locals waiting to see it. This show was presented by the state of Puebla, which is the second region of manufacturing of fireworks in Mexico. The display was accompanied by a live orchestra. We will have to wait for the video from The Fireworks Channel ….

On top of all these firework displays, about 35 papers were presented at this Symposium, over 10 moderated sessions and several workshops.

The tradeshow was very well attended with 24 exhibitors. Both Pirotecnia Adnan and Pirotecnicos de Tultepec had some very popular miniature dummy “toritos” and “castillos” displayed. 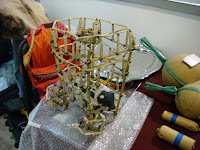 Fireone, Galaxis-Showtechnick, Pyrotronix, Infinity Visions/Pyrodigital and Firelinx all displayed their computer programmed firing systems, which are becoming very popular amongst Mexicans, because choreographed firework displays are now becoming as popular as their traditional “Castillos”.
Posted by Cindy at 4:18 PM No comments:

Email ThisBlogThis!Share to TwitterShare to FacebookShare to Pinterest
Labels: Conventions

The International Fireworks Festival will be held this year between 22nd May and 24th May.

"Fireworks are a pleasing gem in Chinese culture that offers a sense of beautity beyond comparison with their spectacular sights, infinite connotations, and poetic appeal. Liuyang, China’s “capital of fireworks" and the permanent seat of the headquarters of the International Fireworks Association, has held eight successive China (Liuyang) International Fireworks Festivals with flying colors, which has made it world-famous. In order to further promote the fireworks culture and to enhance economic and trade exchanges and corporations at home and abroad, Liuyang is going to hold the Ninth China (Liuyang) International Fireworks Festival and Chinese Fireworks Industry Exposition on the beautiful Liuyang River from 22nd to 24th May, 2009. Built round the theme of “Light the Dreams, Bless the Motherland", this festival will consist of a grand fireworks evening, the third international musical fireworks competition, daylight fireworks performance, fireworks trade exposition and conference, an exhibition of new kinds of fireworks, the list of the Top 60 fireworks companies, the election of the Chinese Fireworks Angel, and so on. At that cheerful moment, with the most advanced fireworks, most exquisite display technique and most artful arrangement, the Liuyang fireworks companies will sing and dance with all the people to present the most honest paean to our motherland to celebrate her 60th anniversary.

We hereby extend to you our sincere invitation, in the hope of getting together with you in colorful Liuyang in this romantic May time."
Posted by Cindy at 4:43 PM No comments: