Fireworks sales are skyrocketing before the Fourth

National sales of backyard fireworks are booming, and that means big business in New Hampshire.

Sales are at an all-time high, according to the American Pyrotechnic Association. Last year, sales soared to $930 million nationwide, with backyard fireworks sales representing $620 million, up from $400 million in 2000.

This year, sales have been "a little quieter than usual," probably because of the economy, said Mary McCluskey, manager of Phantom Fireworks in Londonderry.

"But people still like their fireworks, and they are coming in to purchase them," she said.

Among her customers the other day was 38-year-old Dennis Cremin of Chester, who said he and his friends all chip in $100 to buy an assortment of fireworks that they set off on a beach in Massachusetts the night before the Fourth of July.

Fireworks are legal in New Hampshire, but not in Massachusetts.

"It's pretty much a tradition," he said. "The place where we go to set them off, I've been going to since I was about 5 years old."

He said he continues to enjoy setting off fireworks with his boyhood friends, now adults with families who participate in the annual Fourth of July celebration.

Others shopping for fireworks at Phantom included Dimitri Panacopoulas and his girlfriend, Emily Myers, of Londonderry. 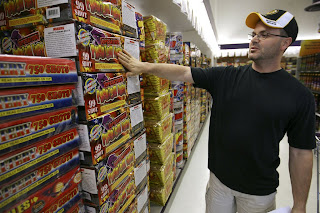 "We're already starting on another cart," Myers said after they loaded up their first shopping carriage with two huge boxes of fireworks.

"We enjoy the celebration and having everyone get together," he said. "It's an annual tradition. It's just friends and family."

Having a celebration at a friend's house also beats traveling to a professional display, Panacopoulas and Myers said, because that involves fighting traffic and putting up with large crowds.

Michael Clark of Washington agreed. He made the 21/2-hour round trip to buy an assortment of fireworks at Phantom Fireworks in Londonderry Wednesday afternoon.

Clark said he hates going to professional fireworks displays, but loves having his own.

"You're fighting traffic to get to the display," he said, "and you have to arrive three hours ahead of time to even find a parking space. At the end, it's all smoky — you don't know where your car is."

While consumer fireworks are illegal throughout Massachusetts, New Hampshire communities have the option of banning them or allowing them with some restrictions, including a permit.

Officers use their discretion when they respond to a fireworks complaint, he said. If the amount of backyard fireworks is small and no one has been hurt, typically the officer will confiscate the fireworks and issue a warning. But if it involves a repeat offender, an injury or a large amount fireworks, then the violator would most likely be arrested, Lewis said.

Some towns, including Hampstead and Pelham, require residents to get a permit to use fireworks on their property.

But Pelham fire Chief Michael Walker said he's only aware of two permits that are sought and issued each year. One is for a resident who holds an annual Fourth of July party. Anyone else using fireworks does not have the necessary permit, Walker said.

"I can hear them from my house," Walker said. "But you can't catch everybody. It's analogous to catching people who are speeding. We certainly frown on it. It's not tolerated, and police respond to fireworks complaints and take legal action."

Walker said there several dangers associated with consumer fireworks, including fireworks that don't explode after the fuse is lit. This can lead to serious burns and other injuries if someone picks it up and it explodes in their hand, he said.

New Hampshire state Fire Marshal Bill Degnan urges anyone planning to celebrate the July Fourth holiday with home fireworks to use extreme caution and to keep fireworks out of the hands of children.

"Fireworks are explosive devices," Degnan said. "They can cause serious injury if misused or handled carelessly. They should only be handled by responsible adults."

For many Americans, fireworks have become a way of life during the holidays — beautifully colored sparks flying through the air with loud rumbling explosions. But people often forget that they are playing with explosives, dangerous chemicals and combustibles that can destroy property and injure people, Degnan said. They throw hot sparks through the air and can reach temperatures hotter than 1,200 degrees, he said.

William Weimer, a vice president of Phantom Fireworks, said manufacturing improvements and closer government control have made today's consumer fireworks much safer than they once were.

While sales figures have been soaring, the total number of injuries from fireworks has been dropping, Weimer said.


Dennis Cremin of Chester looks through the Phantom Fireworks trying to decide what he wants this year. Cremin and a group of his friends each spend a bit of money and get together every year to light them off on July Fourth. Staff photo
Posted by Cindy at 5:28 PM