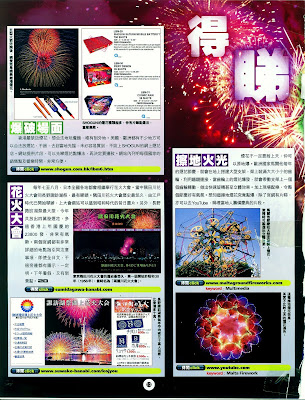 Flipping through the locally published Next Magazine, we found our Shogun website featured in one of their articles about fireworks! Roughly translated, it is mentioned that fireworks are illegal in Hong Kong, but it is legal in the US and Europe. Before you go there to legally shoot some fireworks, you can click and view the videos of the fireworks on the Shogun website before buying. The website lists all the countries the fireworks are sold including opening hours - very convenient.
Posted by Cindy at 2:26 PM No comments: 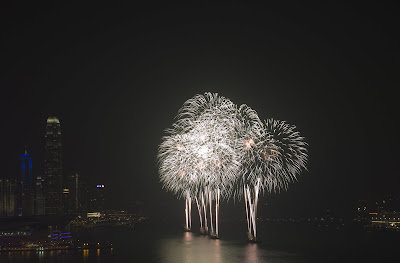 On October 1st, China celebrated its 60th anniversary of Communist Rule. In Hong Kong, the day ended with a fireworks display with a budget of US$400,000, in the harbour. Apparently "more than 31,888 fire shells" were discharged in the 23-minute display off 4 barges. The display was sponsored by the Chinese General Chamber of Commerce.

As promoted by the Hong Kong SAR Government, "the fireworks display consists of nine scenes of different themes. The first and second scene features colourful and spectacular fireworks to celebrate the 60th anniversary of the founding of the People's Republic of China, and also the pride of China. In scene seven, there will be smiley and heart-shaped fireworks to show the spirit of Hong Kong people.The fireworks display reaches its climax at the last scene with fast and rhythmic firing of shells displaying the Chinese characters for "China 60", wishing all the best to the home country." 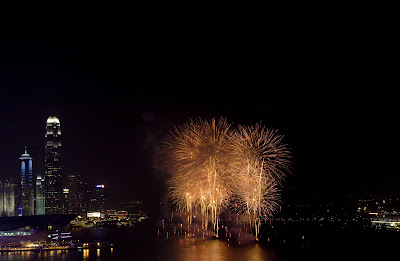