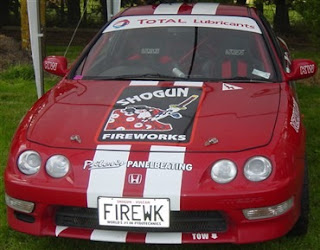 Shogun has been a sponsor of York Motorsport since 2005. York Motorsport started in late 2005 in Auckland, New Zealand. It competes in the SS2000 Honda Cup with James York as Driver. The Honda Cup is a series that is based on the Shell Sport and Super Sedan classes of the 1980's. All cars competing must be 2 litre engines or less.

More details can be found at www.yorkmotorsport.co.nz.
Posted by Cindy at 10:25 AM

Just thought that i would drop you a note on here and let everyone know how the race season is going.

So far we have had one race meeting and this was quite good for me with vast improvements on last seasons times. This coming weekend we have our first race for the season at my home track called pukekohe racing park. This should be a very interesting event and judging by the lap times i did in practice last week the car should be going very well. This event is then followed by another race meeting at Taupo Motorsport Park the following weekend. You may have seen this track in the news recently as it hosted the A1GP World Cup of motorsport last weekend.

I would once again like to thank everyone at Shogun for their support. I will keep you updated with the progress over the season.